Early Television (1952) and the great Magnifier 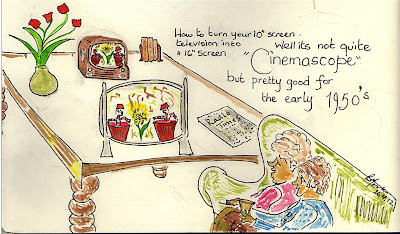 “Television and the Magnifier” (Click over sketch to enlarge)

It was about 1952 when we got our first television,
I think we were one of the first to get it on Hud Hey.
It came has a complete shock when my father said,
Were going to have a tele and you can watch pictures,
Watch pictures! But how can that possibly be?
You can’t watch pictures through a box and wires….

The tele arrived, it was a squarish shape,
Beautiful wood finish, do not remember what sort of wood,
But darkish brown and very high gloss finish.
The whole thing would have been about fourteen inches square,
The actual viewing screen was about nine inches square.
This was something really special and at the time it was cutting edge….

Not too sure about the programmes, but certainly,
Remember my favourite which were “Bill and Ben”
The flowerpot men, who would use words like,
“Blobberlob” and they had a little friend called “weed”.
There was also, Andy Pandy, Rag Tag and Bobtail,
Muffin the Mule, Sooty and Sweep.

You watched and watched that tele,
Though programmes were not on all day like today,
They transmitted over short intervals,
And in between would show this “Testcard”
Which showed a girl in a centre circle,
And surrounded by borders of different shades of grey.
It was all black and white them days, no colour.

A year or two down the line,
And my father brought home this special glass,
It was what appeared to be a enormous magnifier,
It was placed duly in front of the tele,
By looking through this magnifier,
Your viewing screen had increased to about twelve inches square.
It certainly was not “cinemascope” as we probably know it now.
But this magnifier did help at the time.

Can’t remember much about the grown up programmes,
But do remember seeing the football results,
They were on Saturday tea time,
And a treat to hear it said, over that box,
“Accrington Stanley” and “Blackburn Rovers”.

Please enjoy for now before I do my thing on: Bonfires with bonfire toffee, parkin, hot tatties, carved out turnips, penny for the guy, etc etc etc.