I can clearly remember as a youngster passing “Margerisons”, then situated on Blackburn Road, below the St. James Church, next door to the Church Lychgate…… passing their garage on a daily basis on my way to and from the St James School. I would usually see Mr. Margerison, a tall stocky round face chap with flat cap and glasses.. he could easily be identified as the main player…and usually giving instruction to a member or members of his workforce…I wonder if this was Fred Margerison ? because it was he who was the principal owner of the garage (m. Isa Lord, whose grandparents owned a small factory that made cooking ranges – and invented and patented a type of flue)….


The Building was large and grey, and I am sure it was three storey and next to this building on the Haslingden side was a low one storey canopied building which always seemed to be a hub of activity (Click over above photo to enlarge)..

Their business listed as “Margerison Brothers Engineers” thrived from the 1930’s up to at least the mid 50’s and possibly later, and at their peak employed up to 30 men. They were very versatile and carried out repairs to vehicles, but were also Haulage Contractors and suppliers of limousines for Weddings and Funerals etc, in fact they also had a funeral hearse which Mr. Margerison Snr would go and pick up the disceased.. The limousines of which they had two were Rolls Royce’s, and were actually owned by the Coleman Family (as in the Coleman’s Mustard people).. It is not known how they became the trustees of the Coleman’s Roll’s Royces….
I can remember their haulage vehicles which where painted a mid to dark green, with gold lettering (Click over photo top right to enlarge). One of the contracts they had was to remove the Church at St. Stephens, Grane from its original location near Crowtrees to its present location opposite the Haslingden Town Cemetary. Each stone had to be numbered so that it could be re-assembled in their exact order.


(I am indebted to Tina "Margerison" O'Toole originally from Accrington but now of Canada, for kindly supplying the photos and most of the factual information supplied here)....

I also remember that from the late 50s or early 60s, the Margerison garage site was taken over by Mr. Neville Carne of Bury, and I think he carried on with that business or a similar business. He also inaugurated from here "Skytours" which became a very successful holiday travel agents firm and I think they may still be going today (Bury based offices). Mr Carne married national celebrity "Yana" who was a top recording artist of the day.

Today (2008) on the original site of the "Margerison's garage" is a firm called "Wilson's Ranges & Stoves" (Click over photo below to enlarge)..... 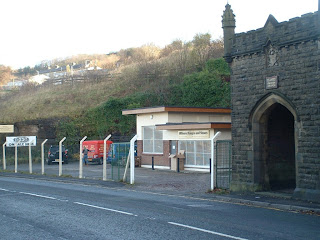