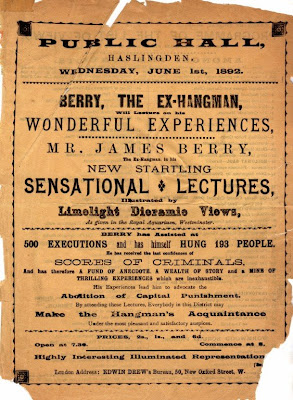 James Berry (1852-1913) Here is a flyer from 1892, promoting a visit to Haslingden Public Hall by the ex British Hangman, James Berry..... (Thanks to Kieron Ridehalgh for copy of this flyer..Click over flyer to enlarge)

THE EX HANGMANS DIFFICULTIES - James Berry the ex-hangman, appeared to a judgement summons at the Haslingden County Court, and resisted his committal for a debt of 30 shillings.  He stated he had done nothing since November, his lectures on hanging having failed to pay, and though he had tried to get work as a commercial traveller he had failed.  His six children were out of work, and no one would give them employment because of the office he (Berry) formerly held.  There were six judgments against him in the Bradford Court, but he could not meet them.  Jud Coventry sympathised with the debtor, and suspended his committal.

THE EX HANGMAN AND THE ACCRINGTON COMMERCIAL - At Haslingden County Court yesterday, before Judge Coventry, James Berry, ex-hangman, was brought up on a judgment summons by Albert Wilkinson, commercial traveller, of Accrington.  Berry had been lecturing about the country, and Wilkinson had worked the lantern for him.  Judgement for 30 shillings, had already been given, -- Mr. R.K. Whittaker (who represented the plaintiff) said defendant was well able to pay.  -- Defendant said he had done nothing since November.  His last lecture did not pay.  He had tried to get work as a commercial or brewer's traveller, but failed, and his six children were all out of work, - No one seemed inclined to give them employment on account of the office he had held. His Honour suspended payment of the amount.

Visit Of Binns, The Ex-Hangman - On Tuesday, Binns, the late hangman, pitched his tent behindthe New Inn yard and with a dummy figure performed mimic executions during the evening before the eyes of many Haslingden people, whose morbid curiosity had been aroused by the announcement of the visit.  Binns also showed relics of certain murderers he had executed.

During the 1960's I had a spell working via agency for Singer-Cobble at Blackburn, and this big guy who was the security man came to the Office now and again, and I can remember someone saying to me "Do you know who that guy is (the security man), it's Harry Allan - the last hangman of Great Britain" ...... and even at that time I believe he was still paid on retention for such services should they ever be called for... I was to see him again, not far away from Haslingden, he resided, just over Grane Road in the cottages on "Kendal Way" which run alongside the Pack Horse in the direction of Belthorn.... Harry finished off his working life giving out change whilst in the kiosk on Fleetwood pier.