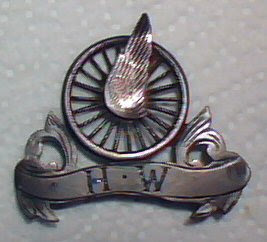 Here is a photo of a badge sent in by Jim Nuttall of the Haslingden Wheelers Cycle Club, the badge is silver and hallmarked.

a update from Jim Nuttall. "Just an update about the HW badge.

I rang my sister last night,and she told me that she has had a look at a census for around 1901, and found that our grandad Harold Butterworth, worked as an apprentice at a cycle works in Haslingden.

I can't find any information about the cycle works, on the internet.

Update: 15th October 2010: Jim Nuttall has just sent the following information on the Haslingden Wheelers Club which he has kindly received from Tricia Kenny:

"Haslingden cycles were made at Croft Cycle Works, behind Higher Deardengate, which was started in 1882 by John Stancliffe Cordingley. The Trade Directory of 1909 lists him at 26 Deardengate, a bicycle agent and manufacturer, in 1913 he is listed at the same address but is now a motor car agent and dealer. John Cordingley held the cycling championship of Rossendale for 7 years in succession from 1886 to 1892

Does anyone have any further information etc on the Cycle Works in Haslingden?

Look at these old Haslingden "cycling related photos"..... top) is Cordingleys Cycling Shop which was on Blackburn Road, where Laws the butchers is now (at the side of the Black Bull) 2) Georgie Berry on his penny farthing in 1944 3) Richard and Will Moorhouse with their penny farthings in 1891 and 4) Will Moorhouse on the penny farthing and Jim Crankshaw on the cycle at Flaxmoss in c1930.
Above is a "Annual Ball" programme for the Haslingden Wheelers and Motor Cycle Club from 1926.
The Programme was kindly supplied by Marie Ives 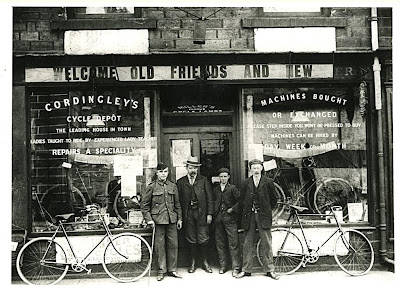 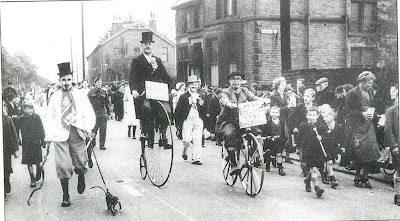 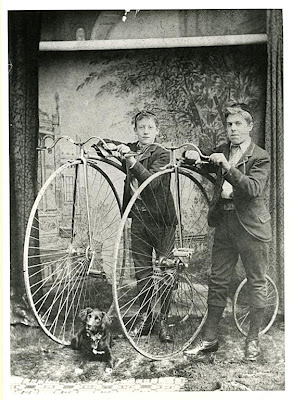 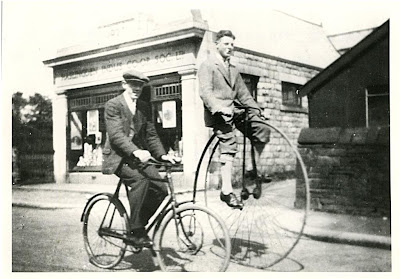 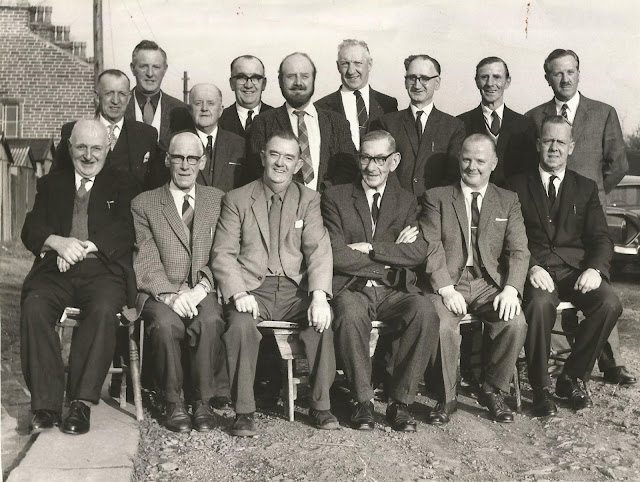 "Just seen this on the site and wondered if you wanted some names to go with it.  I think it was taken in the late 1950s or early 1960s.
I can't name the first 3 men from the left on the back row, but the next one is my father, Clifford Willis, then don't know, then Mr. Craig, who was Parks and Cemeteries chief for the Council, 2 more unknown and finally Harold Taylor who worked with my father at Duckworth Clough Mill.
Front row I should know the first man but can't name him but he used to win lots of prizes at the show and I think lived in Helmshore.  Next to him is Billy Johnson, then Bob Spiby, who was the secretary of the society for many years, Sam Good and Reg? Whitham.  Don't know the other two.
The Allotment shows were held in the Public Hall every September.

Additional information kindly supplied by David Wise on 1st November 2015. On the back row the 2nd one from the L is Jim Wise (David's father). Front Row first left is Mr. (Jack?) Ramsbottom. Also on the front row is Walt Taylor who is on the front far right and who lived on Broadway
Posted by Bryan Yorke at 19:08