(On this occasion maybe not pure Haslingden! but possibly loved by Haslingden) - "They do say a change is as good as a rest" 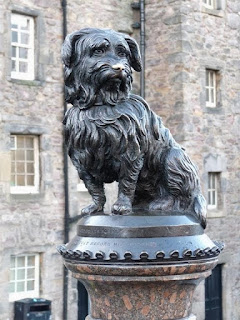 (I took this photo on December 31st 2013. A visit to Edinburgh has become our annual pilgrimage every New Years Eve.  But this year was even more special, because it gave me chance to go and visit Greyfriar's Bobby, something I have wanted to do for a couple of years now.  The whole story about "Bobby" is fascinating and I have tried to capture the "jist of the story" in this little poem.  There are lots of other stories about the Old Kirkyard as well which are also interesting, and I will try and capture some of this in a later poem).


"He was just an ordinary terrior",
And nobody knew his name,
But one day something happened,
That would bring him lots of fame.

His master John Gray fell ill and died,
And left poor Bobby to fend,
From near he watched with watery eyes,
As they buried his master and best friend.

Day in, day out, poor Bobby whined,
Whilst sat on his master's cold grave.
He'd bark so loud when anyone went near,
So loyal to protect his friend so dear.

Many times a day, was driven off that grave,
By gardener and Sexton James Brown,
But Bobby so loyal just kept coming back,
His exile just went disobeyed.

Before long the Sexton gave in,
And made little Bobby his friend,
He gave him a mat to lie on,
Then made him a shelter to keep him dry.

After time people started to gather,
Close to the Kirkyard gate,
They made it a sort of tradition,
To watch dear Bobby appear, for......

Everyday at the strike of one,
And to the sound of the mighty gun,
Little Bobby would leave that grave he loved,
To wander off for just a short while,
To get his midday meal.

Fourteen years Bobby watched o'er that grave,
So loyal, like no other until his very end,
For now he'd reached the age of sixteen,
And the time had come to rejoin his master,
And best friend.

And now in death, his fame is great,
With plenty of films and books,
And even a pub named after him,
on nearby Candlemakers Row.

A little dog with such a great big heart,
Who became a "star" but never knew it,
And now they come from far and wide to see,
And be, with,
Greyfriars Bobby. 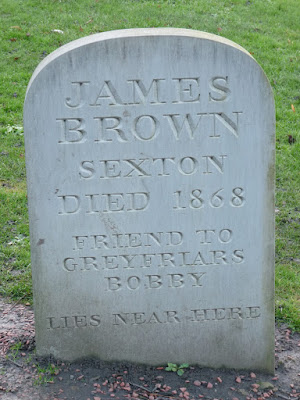