Well I never knew that!

Mr. James Maxwell (1838 to 1893) was born and brought up at George Street in Haslingden.  He was a well known Architect of his day and co-designed the magnificient Blackpool Tower, but sadly died before the Tower was finished.

Born on 14th June 1838, the only child of Thomas Maxwell who was a builder, plumber, and glazier and his second wife Mary who was the daughter of Henry Holden and his wife, Judith.  James Maxwell attended Whalley Grammar School before being articled to the architect Thomas Holmes of Bury from 1852 until he set up in practice on his own account in Bury in December of 1857.

Maxwell's early works included Bury baths and offices for the Bury Times, both built in 1862.  This was also the year of his marriage to Elizabeth Barbara Thornburn, daughter of William Reid Thorburn, congregational minister, which took place on 21st May 1862 at the Bethel Congregational Chapel in Bury.  The couple had one daughter and three sons, one of whom, Francis William later joined his father's firm.  The years after his marriage saw Maxwell's practice prosper; he was placed third in the design competition for Rochdale Town Hall in 1864, and shortly afterwards took Charles Tuke into employment. Later the pair Maxwell and Tuke went into partnership.

If you want to read more then try Maxwell and Tuke on Wikipaedia (and then click on "List of Works") which list the many iconic buildings which Maxwell co designed.  I am sure that the one which will always stand out will the Blackpool Tower, but also Maxwell was responsible for many of our local Haslingden buildings eg: A weaving shed at Commercial Mill Paghouse was designed by them.

My thanks to Douglas Newton for informing me of this information.

Also of special local history is the following "Blackpool Tower" which was built and shown off within Kirby's Grocers Shop on Bury Road.  Mr. Kirby built this - and thanks to Tim Kirby for kindly sharing this with us. 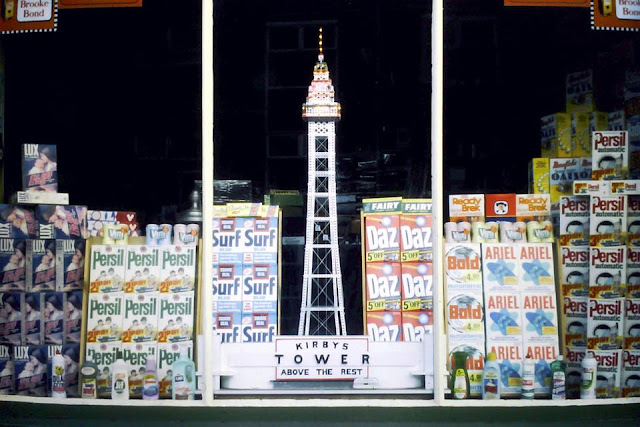