I have today received this email with the following details, asking if we can help!
Can you?

Bryan,
This is a long and complicated story, so please bear with me

A few months ago I was contacted by a lady in Blackpool. She had a photograph of an unknown football team and a gold medal, the photograph is a team photo from the late 20's - early 30's and contains her father.

She has no idea who the team is or what the medal is for. The medal has no inscription on it so fails to give us a clue.

However, I placed photo's of the team and the medal on our website hoping somebody would turn up a clue in order for us to identify it.

This morning I had an email from a Bury supporter who claims to have a similar medal, in fact he states its identical - only his has been engraved and was from Haslingden Primitive Methodist Football Club.

So, my question - can you help in identifying, either yourself or by placing them on your blog (which I have come across on Google)

Any help you can offer would be gratefully appreciated by Brenda in Blackpool.

The following is the story I placed on our website, with the two photo's attached

Can you help!!
Appeal for help in identifying local football teamThe club were recently contacted regarding her late fathers footballing career.

George Taylor was a resident of Bury and worked in Peel Mills all his life, however, he also had a passion for football and holds a solid gold medal. All we have to go on is a frail photograph, the medal and a trophy featured in the photograph.

Can anyone identify the football team, the medal (which is solid gold and bears no description) or even identify the trophy within the photograph.

The gold medal is hallmarked and after being looked at by an expert, it has been identified date wise from either 1933 or 1934.

If you can help identifying the team in the photo, any of the players in the photo, the trophy shown in the photo or the medal, please contact Gordon Sorfleet at Gigg Lane using media@buryfc.co.uk 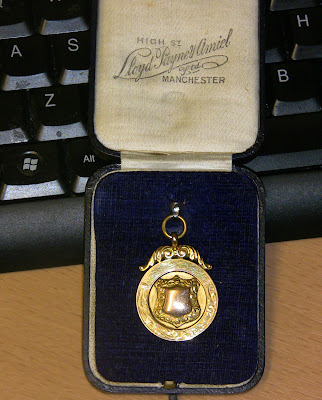 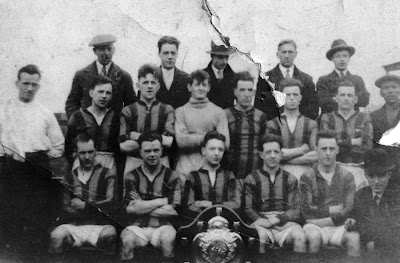 Please click over photo to enlarge, and then click again to supersize.....
Posted by Bryan Yorke at 14:30