Bonfire Night at Martin Croft in the 1950's 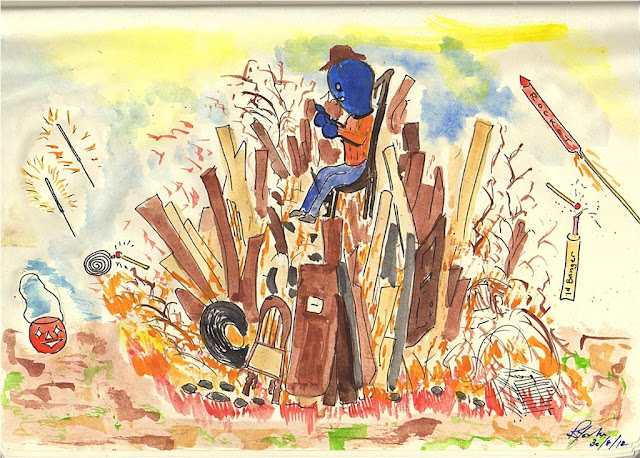 It was down to us to get the wood, and build, and build the stack,
We’d try and try to reach the sky, but could only ever go so high.
We’d mek a truck and a guy fawkes too, and go round every house,
Have you got a “penny” for the guy we’d showt with giggles all abowt!
After getting all the pennies from kind folk, to tuck shop we’d all go,
But later on we’d sit the guy in chair, and place him reet on top of stack,
And later on that very neet, would bonfire leet, to watch him burn away.

Farmers wife Joyce from Martin Croft, had been busy all the week,
She’d collected some of “turnip crop” and carved out all the centres,
Mekking such funny faces, which lit up with candles inside,
And had put a string from side to side and these to be our lanterns.
Mrs. Carey had made some “bonfire toffee, specially for the neet,
A remember little hammer she had, to break it up to size it reet.
Thad never tasted toffee like this, it was so “blummin” good

As night went on, they’d bring their “tatties” to put within the fire,
Many were lost and couldn’t be found, but them that could were black.
They’d come owt black as “up luvvers”  with hard burnt crusted skins,
But “by gum” insides of them tatties tasted so good, but you had to wait,
Wait to let em cool down abit, then get stuck in with tha black fingers.
Orange juice was the drink given to help to wash it all down.

We had the best of fireworks, though probably tame today,
With Rockets, Roman Candles, Pin wheels, Jumpjacks and Bangers.
But lots and lots of “sparklers” and coloured matches as well.
Thi were such happy times, them bonfires of the past,
But one fellow who didn’t enjoy em same,
That “guy” who’d sat upon that chair, upon that blazin fire.
All but a “ember” now…..

On a happier note, I well remember our efforts to gather firewood for "Guy Fawkes Night Bonfire", where various neighbourhoods always had their own local celebrations, and the 'gangs' of kids from each locality would plan and carry out raids on other firewood collections to augment their own. The Station rd. mob, that I was a member of were particularly successful in this nefarious activity, even playing "Hooky" if necessary on schooldays to facilitate the theft of wood stored in walled-off back-yards whilst parents were at work, and other kids in school. We stored our timber on-site on the grassy slope at the approach to the railway station, which had only one possible way in and out to guard, and we used to be on alert until 10.30 - 11.00 p.m. most nights once we had accumulated a decent stack. Hazel Greenwood's mob were the most fortunate, as they had a large old barn just off the far end of Commerce St., that was impregnable. I know, - we tried to figure a way to breach it!  I will call it a day for now, but if you would like to have more of my ramblings, maybe from my time at Aitken's mill at Irwell Vale and the restoration of the derelict building that became the Lumb Mill, let me know. 'Bye for now, Alen.

OTHER BONFIRES AND INFORMATION ETC: 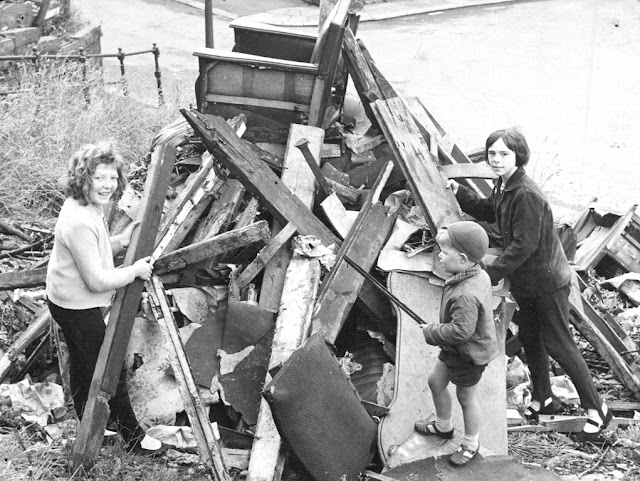 Bonfire Wood collecting near to SKINNERS ROW OR TANPITS OR VALE STREET (eg: On the back at midway between Cross Street North and Cross Street South.
Shows Sandra Trainor (Sandra Trainor Hayhurst) and Barbara Fielding.
Thanks to Peter Fisher for sharing with us